I’ve mentioned voice coach Nancy Woolfson before in these voice over blogs – I’ve found many of  her on-line voice over training videos to be very insightful and informative. She’s great for taking the less obvious approach to voice work in a way that often proves highly effective.  Anyway I mention her because she posted something recently on an on-line voice over group that caught my attention. It was a link to a video presented by US dialect and voice coach Erik Singer that looks at how actors approach a performance depicting a real historical person. 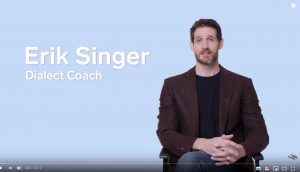 Erik looks at a number of film depictions of people like Freddie Mercury, Churchill and Dick Cheney to name a few and breaks down what’s going on linguistically for the actor. For example they have to decide whether to do an impression of the person or perhaps just latch onto certain speech characteristics.  Once they’ve decided they then have to produce the vocal goods.

Reading the comments below the video I discovered I’m a little late to the Erik Singer party as he’s been presenting these videos for a while – and people really, really like them and him!  I can see why – he has a clear, informative delivery and explains complex notions in an easy to understand way.  His voice is very easy on the ear and that, partnered with relevant film clips, makes for a interesting video viewing .

What makes Erik Singer’s take on this area interesting is that he brings this linguistic angle to proceedings: looking at the actual mechanics of producing different sounds as a result of the relative position of the tongue, teeth and lips.

Before watching this video if I had been told that I’d watch half an hour on a subject area that took in hyper-sibilence, the action of the velopharyngeal port, rhotic speaking and the pharyngeal squeeze I think I’d have said I’d give it a miss.  In fact the video was fascinating.

According to one of the comments – watching the video was a work out for the tongue.  I know what the poster means: every time Erik explained what the actor’s tongue was doing to help produce a particular sound I was busily trying to get my tongue to make the same movements – and I don’t even do accents!  I challenge anyone to watch and not do the same.

Anyway I see Erik’s got quite a few episodes on-line so I’ll be checking out some more in the near future.