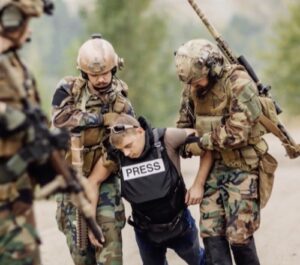 A video I recorded a voice over for a few weeks ago is now on-line. I was asked to provide a voice over for a video to be shown at the launch of the annual conference in The Netherlands which hopes to raise awareness of the risks faced by journalists just trying to do their job. It’s called Free Press Unlimited.

Increasingly, in many parts of the world, just trying to report on current events may see journalists faced with intimidation, violence and in some cases even death.
I have recorded these kinds of videos for this conference for a number of years now and I’m constantly shocked by the risks journalists run to get the story out and by the kinds of situations they may find themselves in and the consequences of that.
In previous years I also narrated a number of short videos each of which described the work of an individual journalist and the things they had endured just doing their job.

It amazes me that in such circumstances people actually want to be a journalist. It certainly makes me grateful that my job only involves sitting in a sound proofed metal room in my basement talking to myself.

I don’t want to be a journalist but I’m grateful that others do and appreciate their efforts in keeping me and others informed.

Here is the video