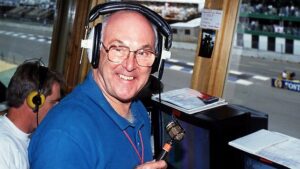 Some voices get associated with certain things – for example for many years John Motson was the voice of football – or at least he was to this only occasional viewer of TV footie.
Likewise I’ve never watched motor racing but it was often on as my brother was a fan so there is no doubt in my mind that commentator Murray Walker, who sadly recently passed away, was the voice of F1 motor racing. Of course it helps to become “the voice” if you get to do it for a long time – he was on BBC and then ITV from 1976 to 2001.

In terms of voices associated with brands or physical things it seems that a frequent question on Google is to ask: who is the voice of Amazon’s Alexa?  Scarily for us voice artists there isn’t one! Alexa’s voice is entirely synthesized and not – like Siri – made up of computer reconstituted syllables chopped up from the recordings of a real voice,

That’s something to think about if you are one of the many new arrivals in the voice over world in the last year seduced by stories of ever expanding markets and easy money (It’s just talkin’ innit?). But that’s a subject for another blog post

At least for the moment I’m not sure Alexa can be “real” enough to come out with gems like these from Murray Walker’s commentary:

“Either the car is stationary or it’s on the move”

When AI and TTS get that human we’ll all be in trouble!