Two of my former bosses have launched a new radio station.  Boom Radio is targeted at the Boomer generation (born 1945 to 1964) and has been set up by Phil Riley and David Lloyd. They were my bosses when Mercia was part of the Orion group – prior to the Free Radio re-brand.  Boom seems to have been established for people who find BBC Radio 2 music a bit too edgy.

Whilst I’m interested in any new developments in radio – and this station claims to be filling a niche so far not served by existing stations – there were some things about its setting up that attracted my attention.

Firstly, Quentin Howard – who sorted out all the technical aspects of Boom Radio – makes a number of interesting claims in an interview posted on the IBC website.

Boom Radio don’t have any premises or studios. All the presenters work from home – and not from home studios either – just a mic and a lap top.  The station exists only in the cloud and on a server in a rack on the premises of music programming software company RCS.

Howard says this way of working has not been done before – but I beg to differ. I worked on Planet Rock when it first started in 1999 and this was almost exactly how we did it then.
Like Boom Radio all the shows were voice tracked (although Howard claims Boom aren’t doing voice tracking – only to concede a moment later that in fact they are).

The difference is presenters on Planet Rock had to go to a radio studio somewhere to access the company intranet to record the links into the show.  As a presenter I used Mercia and Beacon as they were the stations I worked at. I would have loved to have been able to voice track my links over the internet from my own studio! 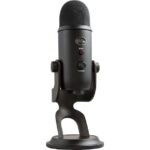 In terms of Boom having no studios – we didn’t have any studios either.  Any Planet Rock interviews were done in a Classic FM studio in London re-branded for the occasion.
The cloud hadn’t been invented then but the radio station only really existed in the software playout installed on a server mounted in a rack somewhere in GWR Bristol.

So Boom Radio’s innovation is not quite as new as Quentin Howard claims – but he must know that as he oversaw all the networking across the GWR radio group back in the day and almost certainly was involved in setting up Planet Rock back in 1999.

Having set that record straight on that – the other thing that interested me was the kit sent out to presenters – in particular the mics.  Howard has specified the Blue Yeti and the Rode NT-USB.  These are both widely used in podcasting and have probably become much more widely used elsewhere in the past year thanks to endless WFH Zoom and Teams sessions. After a while many people wanted a better sound than a laptop built in mic.

He also mentions Thomann t.bone SC420/430 and Audio Technica AT2020 mics.  All are surprising as radio broadcast mics.    On the other hand most of the presenters are recording in less than brilliant acoustic spaces at home and a high quality more traditional broadcast mic would pick up far too much of the unacceptable room ambience. (Howard mentions a presenter living in a Spanish villa – lots of hard surfaces!). So it does make sense to use mics designed to have very narrow and close fields with very good off axis rejection.

I understand the reasons but still find myself with a slightly raised eyebrow at the choices.
Time will tell if it is successful.

Here is the kit presenters are sent. 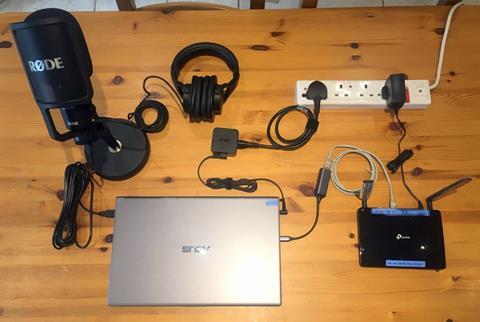 As an aside to voice over artists looking for microphone advice: just because a real radio station is using podcaster mics this does not make them suitable for professional voice work. They are not!