I’ve recently been trying out the Aston Stealth microphone in my voice over studio.

It’s an unusual dynamic microphone – that can be phantom powered – and is designed for a wide range of studio duties having 4 different voicings. I’ll refer to using the mic for music in a studio blog post but here I’ll just talk about the Stealth for voice over.

The Aston Stealth is an end address dynamic mic and is a quite chunky 200mm long and nearly 60mm wide and is quite heavy too at almost 700g. Aston describe the Stealth as a broadcast quality mic which would pitch it in the Shure SM7b or EV RE20 market. Both of those are end address dynamic mics favoured for a neutral sound without any of the proximity effect issues associated with large diaphragm condensers.

I’ve used the RE20 for voice work and you do get clear uncoloured recordings – though of course for some voice jobs a little bit of the bass boost from the proximity effect is useful. I always associate the Shure SM7b with US radio for some reason but in recent years it seems it has become used for a wider range of work including studio sung vocals (especially female), some UK broadcast situations and also some podcasters in the UK too. So far it has not been widely adopted for VO work. 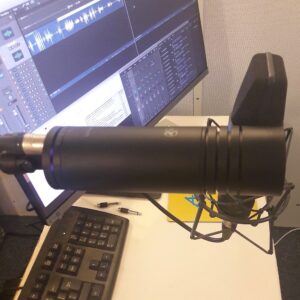 As a former radio presenter I’d probably quite like the Stealth if I was on-air – to me it sounds like a radio mic – and that’s where it differs from the neutral sounding EV RE20 because when used in the powered mode on the V1 setting the Stealth sounds to my ears a little bit processed already – in a pleasing way. But what might work on the radio – and I mean commercial music radio here not BBC Radio 4 type radio – may well not be what you want for voice over. Of course it might depend on the sort of voice and the type of voice work.

As already said the Stealth could be compared to the Shure SM7b which is a mic famous for having very low level that needs a powerful gain booster like a Cloudlifter or FEThead to get sufficient level. The Stealth has no such problems – in its phantom powered mode the on board built in Class A pre-amp provides a massive 50dB gain boost.

I set the Stealth in powered mode and put it up in my booth alongside my usual VO mic a Neumann U87Ai and tried recording a few reads on each for comparison. Aston say the Stealth has an internal shock mount and the foam end to the capsule end of the mic means you don’t need a pop shield.
Note that although it is considered good practice to always use a pop shield on a studio condenser I’ve refined my voice technique over the years so that I don’t pop with my plosives and so don’t use a pop shield with the Neumann U87.  It just gives greater clarity to recordings. 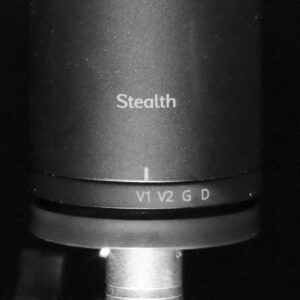 The Stealth settings – chosen via a twisting collar on the mic – are V1, V2, G, D. As a guide Aston suggest V1 and V2 are suited to voices (male and female respectively) , G is for Guitar and D is a dark setting with a rolled off top end similar to a traditional ribbon mic sound – so should be good for voice work with a traditional old-school BBC sound like you might get from a ribbon mic like a Coles 4038 – but at a fraction of the price

So what did I find?
I experimented with the Stealth’s V1 and V2 voice settings in powered mode and found I favoured the V1 – when I was testing it this setting seemed the closest to the sound of the condenser I usually use. That was until I switched back to the Neumann and discovered the latter  had more clarity and air than the Stealth. The V2 setting seems to have a boost to the higher mid frequencies and is more suited to a female voice. I didn’t like it on my voice – whenever I used V2 it just sounded harsh.

Head to head with the Neumann U87 for VO recording , the Neumann won every time. I felt the latter’s recordings had a clarity that the Stealth couldn’t match. In a way this is as you would expect – condensers usually sound more clean and detailed than a dynamic mic and in this case the condenser is considerably more expensive and so (hopefully) ought to be the superior mic. 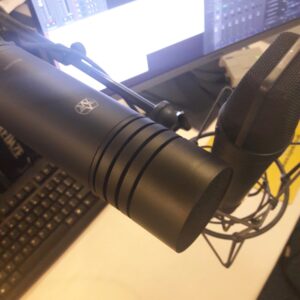 Aston say the Stealth has very good off axis rejection and certainly when recording I found it very directional with quite a narrow field. It was quite easy to find yourself sounding a bit “off mic” after only moving less than a couple centimetres to the side.

In music recording I’ve used the Stealth to record electric guitar and it performed really well – better than the dynamic I often use on guitar cabinets (SM57) – it will undoubtedly be a useful and versatile tool in my studio.

I would not personally choose this mic for my voice over work as I didn’t like it on my voice but it may work well for other voices. Arguably the Stealth’s all-round 4 mics in 1 versatility might make it seem a bit extravagant for just VO work. If you wanted an Aston for just VO maybe the Origin or Spirit condenser mics would work better,