One feature on BBC Radio 4 that has intrigued me for a while is Bells on Sunday  It’s one of those public service broadcast things the BBC do that are – to my mind – incredibly niche in terms of their interest but, I imagine, somehow help to fulfil a remit of providing something for everybody.  Basically its a weekly broadcast of church bell changes being rung from locations across the UK.  It seems whoever schedules Radio 4 recognises the niche-ness of Bells on Sunday as its broadcast at 5.45 am on a Sunday morning then re-broadcast later on at the time I usually hear it at 12.45 a.m.  which clearly is Monday and not Sunday at all.

For many years I wondered about the recording of these weekly peals.  It being the BBC I had sort of imagined that perhaps they’d send out some kind of OB recording truck – or perhaps a small BBC van with a recording engineer who’d be setting up specialist equipment – probably including a vintage RCA 44 type microphone – in a churchyard to record the sounds from a church bell tower. 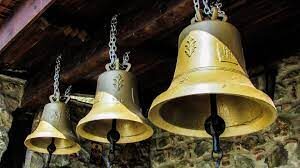 However a Google search reveals that the recordings are in fact made by members of bell ringing groups who record the bells themselves (there is detailed guidance on-line: record in stereo and certainly no cassettes!) and submit the recordings to the BBC.  It’s kind of democratic and user friendly I suppose but loses some of the magic.

The bell ringing compositions played all have different names some of which may refer to the sequence in which the bells are rung – or indeed the number of bells – but to my untutored ear they all sound the same.
I quite like the fact that this British institution continues and is recognised on the radio – I think I feel the same way about the Shipping Forecast on Radio 4 – I like its quirky Britishness but do wonder if mariners really listen to it.

Anyway usually 15 mins are recorded for Bells on Sunday  so that the BBC can choose the best 2 minutes but I’m pretty sure they only broadcast around 40 seconds of ringing bells – but now I’ve got over my intrigue as to how it’s produced I feel that’s probably plenty long enough.  (Sorry campanologists!)