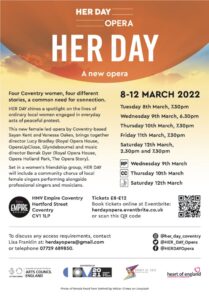 Over the last week I’ve been involved with a recording project that has nothing to do with voiceovers!

With my audio producer’s hat on I’ve been working on an interesting project that was partly funded by Coventry City of Culture.

I’ll probably post about it in more technical detail on my studio blog but in brief I was asked to record a live performance of a newly composed opera.

The performance was in the rather rock’n’roll surroundings of the HMV Empire in Coventry.
It’s an interesting and rather challenging venue to stage, let alone record, an opera.

Although its actual natural acoustic is not too bad there is normally quite a lot of ambient noise in the venue from air conditioning, lighting fixtures, bar refrigerators and the distant rumble of city centre traffic.
All of which I’ll talk about in more detail on the studio blog. 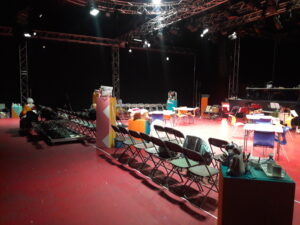 In the event I used head set mics for the 4 principal sopranos and relied on the room mics for the 12 strong chorus.

I also had close mics on the 5 piece band consisting of cello, double bass, flute, violin and piano.

The mastered audio recording is to be synchronised with a video that was shot on the same night by Jack Richardson from Run Home Productions.

Her Day Opera is written by Sayan Kent and Vanessa Oakes and the performances ran for a week in early March 2022.

This was the view (below) from the recording position on the night. 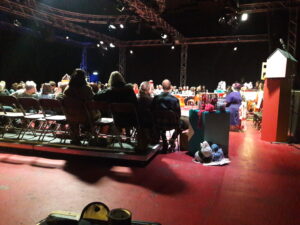