I’m always interested in microphones – and I have more then most voiceovers would need – but this is because I also do work as a recording engineer and audio producer. I’ve written previously about some of the mics I own but here I want to talk about one that I currently don’t. 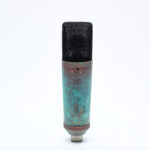 I have recently had my attention drawn to a new UK made entrant in the large diaphragm valve capacitor market. Many new entrants draw on the best specification of vintage and classic mics and invariably try to make them cheaper. However this new mic -the HA-69 from Hammer Audio – goes in the opposite direction – it’s hand built here in England and is very definitely not cheap.

I’ve just been reading the review in the June edition of Sound on Sound and the HA – 69 certainly sounds like a mic to investigate.

Let’s start with the eye-catching appearance – the mic body and the front plate of the power unit are made from brass which has been weathered to give an interesting effect – you get a mix of rust colours and an oxidised green or verdigris. It’s certainly a striking look but I have to say the finish may not be to everyone’s taste 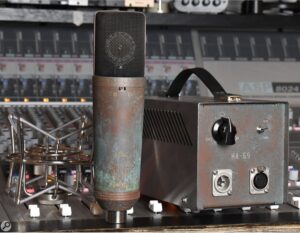 It’s a valve mic that draws on the circuit design of the Neumann M269 a variant of the U67 – it also uses a Peluso capule – the P-K 67 – which is a direct copy of the Neumann K67 capsule. It also boasts a Mullard EC70 subminature valve.

It is functionally similar to the Aston Stealth (but not in appearance) in that it has a selection of onboard circuity to choose from: the HA-69 has 2 switchable “voice”modes – one to provide a natural sound the other a more full bodied sound. Controls on the power unit offer 2 high pass filter options (80Hz and 180Hz) and you can also select polarity options between cardioid, omni, figure of 8 and other “in between” options.

I imagine it would work well for voice over work but in truth it offers far more functionality than a voice artist needs – arguably, for a VO microphone, a large diaphragm condenser with a cardiod pattern is all you need. For most VO work you don’t need a valve and there is no real need for different voicings or polarity patterns 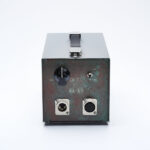 If you are interested you can read the full review from Neil Rogers in Sound on Sound – but before you get too excited about this new hand built piece of audio technology you may want to consider that the retail price reflects the attention to detail involved in careful selection of quality components plus point to point wiring and hand soldering – the price is just shy of £3000!

I’d certainly like to try one but I’m fairly sure I won’t be able to make that kind of investment to buy one in the current economic situation.